In the airport again. Heading home after a great month in Sri Lanka and the Maldives.

Didn't do much today. Went for a swim in the ocean, and got organised.
The area had a power cut, so it was really hot. 5 minutes after a shower I was soaked in sweat again.

I bought a few extra souvenirs, and managed to fit everything in my backpack. Only 21kg though... Qatar airlines accept 30kg... :)

The owner of the guesthouse, also a tuk tuk driver, decided to show me a Hindu temple on the way to the airport.
I was worried it was another "donating temple visit"... But no. He had to pray, and brought me. He did a quick ritual and lighted a pack of sense smoke sticks. And rushed out again. Interesting visit.

Before entering the departure terminal I visited the arrival terminal. Waited for 5 minutes and spotted a tourist. Gave her my guidebook and received a hug from her son. Cool. Have written good advices in the book, and I hope she will pass it on to a new traveler when she leaves the country.

In Denmark Thursday morning at 6am.

See you guys, and thanks to the few people actually reading this :) 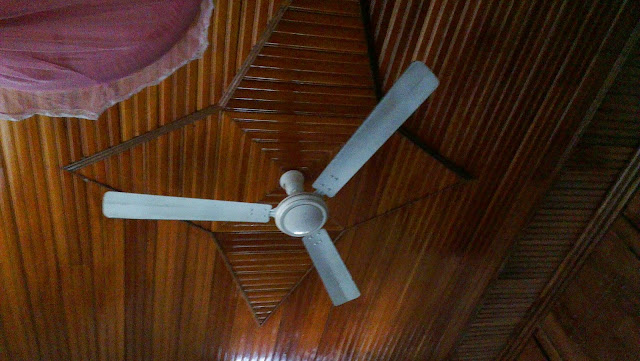 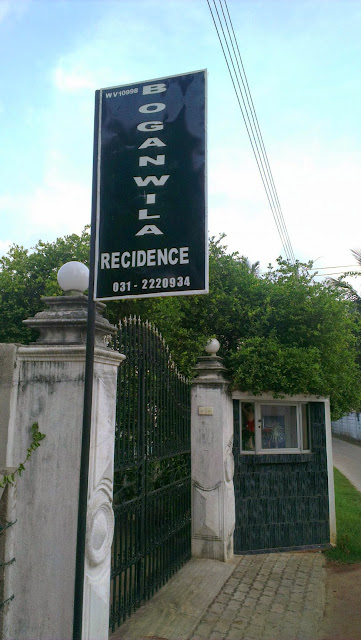 I wanted to buy useful things to bring home. Have seen a lot of cool knives and tools. The manager of my guesthouse knew a place. I was pretty sure I had seen the place when I was on my tuk tuk trip to Trimcomalee.
Anyways, his brother, a tuk tuk driver was eager to drive us there, of course :)

It's definitely low season now. Everyone seems desperate to milk a few rupees out of the few tourists hanging around.

We went there. My 'friend' knew a place where I would get local prices. Aha.....

We went there, lots of places selling tools and knifes. I took a tour, and quickly realized I could get cheaper tools elsewhere than my friends place. Great....
Not a huge difference though. I ended up buying 4 different tool/knifes. Interesting if the airport police will accept me traveling with them.
They probably just need a little $help$.... :)

My lunch was a stack of rotty. You'll get a huge stack, but you'll only pay for the ones you eat. The rest goes back to the display. Wonder how many times one rotty can travel back and forth in one day...
There's plenty of different ones. Some spicy, some average. But all really nice, and usually only 35 rupees each. (2dkr) 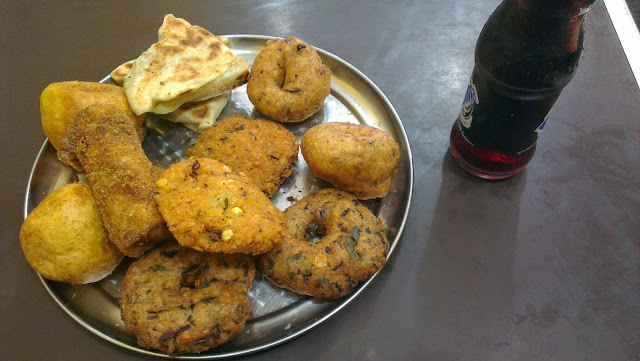 The flight from Male was one hour delayed. So plenty of time to spend my last Rufiyaas in Male airport. An airport with only one, busy, runway.

Almost no one on the plane, so I went to the best window seat to a nice view of the Maldives from above. 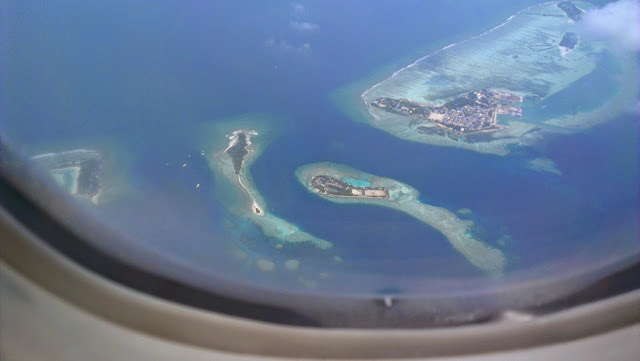 After three weeks in Sri Lanka it feels like coming home. I know my way around know.
Know a tuk tuk to the train station is maximum 150 rupees.

The policeman checking my passport was asking me for a second visit visa. I'm 95% sure my visa allowed two visits.
Anyway, he offered me a new visa if I could "help him a little"...
100 rupees was clearly not enough. 200, same look on his face. I said I would just go to the immigration counter and have it fixed. If he was right I was looking at a 25us$ fee. But now, the 200 rupees was enough, and I got my visa and another stamp in my passport.

At Katunayake train station, the station manager invited me inside. Overprice again, was my first thought. I was wrong. He was really friendly and told me a lot about the job as a station manager, and the system in Sri Lanka.
He showed me the stations safe, extra money and tickets. The one room also had a bed for him to sleep.

Back in Negombo a tuk tuk driver wanted to show me a nearby 1000 rupees guesthouse. When I got there they wanted 2000 rupees pr night, but they quickly accepted 1000 rupees.
They seem very friendly. Tomorrow they will try to help me finding some Sri Lankan tools.

Photos: view from the window at Enzaa guesthouse.  from the plane and the train station. 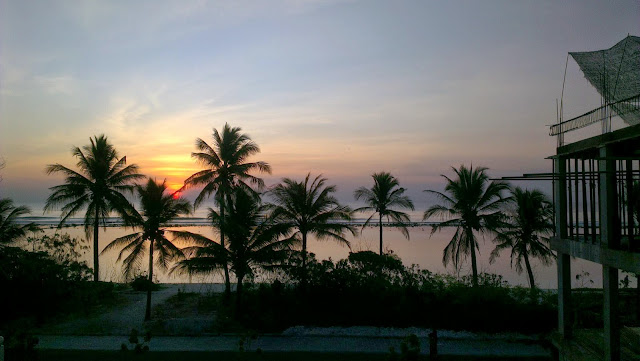 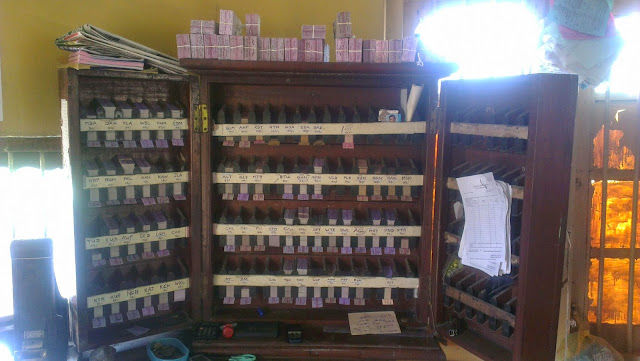 Left Maafushi this morning. A beautiful day with calm sea. You can sit on the roof of the ferry, which gave a perfect view in the pleasant morning temperature.

Now located on a new island, Hulhumale. It has a connecting road to the airport, perfect.

My guesthouse has a nice view to the beach.
The receptionist adviced me to go snorkeling at the north east corner of the island.
A great advice.
It was a shallow area with lots of live coral, and lots of life. The area had lots of current which made it a very interesting spot for snorkeling. I could drift along the north coast while watching the life less than a meter under me.
Some places I had to steer to avoid collisions with the sharp coral.
I saw two eaglerays cruising away from me.

The beach on the north coast of Hulmumale is the total opposite.

Terrible proof when I was back on the shore. I met a local man who seemed interested in me, and which fishes I had seen. He was telling about the nice area while drinking a can of redbull. When we left each other, he threw the can on the beach. Next to hundreds of bottles and cans... Hmmmmmm.....

Only the popular beaches are clean. The rest is covered with rubbish. Awful, and crazy culture!

Flying back to Colombo tomorrow.

Photos: from the Maafushi - Male ferry. 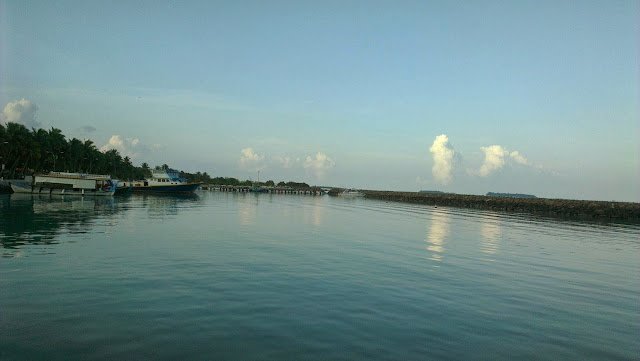 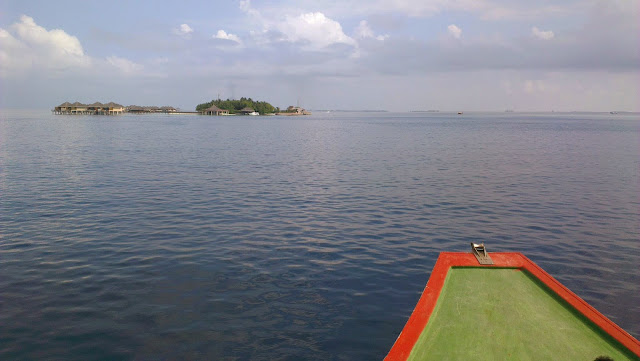 Last full day on Maafushi. Went on a tour with a nice couple from Bangladesh. Including their 5 months old baby girl.

First we went to a neighbor island, Guraidhoo. Tourism isn't big there, so we got a taste of the real Maldivian live. The island is less developed than Maafushi. This means a lot of waste everywhere on the island. A lot of the people on Guraidhoo were celebrating the results of the election.

After a look around Guraidhoo, our guesthouse crew from Narnia took us to a nearby picnic Island.

An inhabited island with nice beaches, bbq's and facilities.

A nice place to relax, and our guide served us a nice lunch.

Back home on Maafushi at around 4pm.

Time to rest before dinner.

Tomorrow, I'm catching the early ferry back to Male. 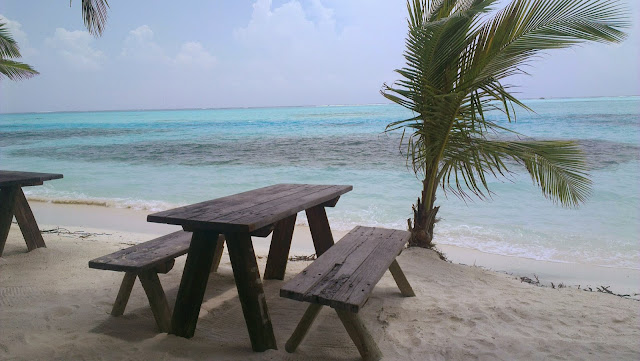 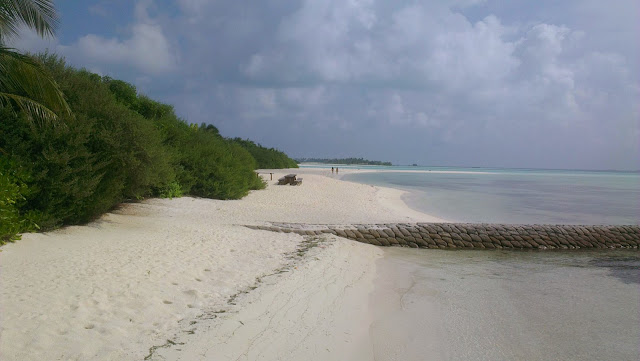 The last two days I've been diving with Maafushi divers. A total of 4 dives.
Have seen lots of turtles, sharks and colorful fish. An eagel ray, octopus and today we dived a shipwreck.
Very nice divesites with clear warm water (28 degrees).
Three of the dives were drift diving. Quite funny way to dive, and a little challenging.

Tonight I went night fishing with a local boat, and two tourist from Israel.
We were fishing for two hours, and caught a lot of little fish. Perfect barbecue size...

The tour included a free bbq with our own fish.
Eating the fish was a big disappointment though. The fish was half cooked, and had a strange taste of petrol. Bigger. Looked so nice.

Tomorrow is probably my last full day on Maafushi, so I'm going island hopping to the nearby island. 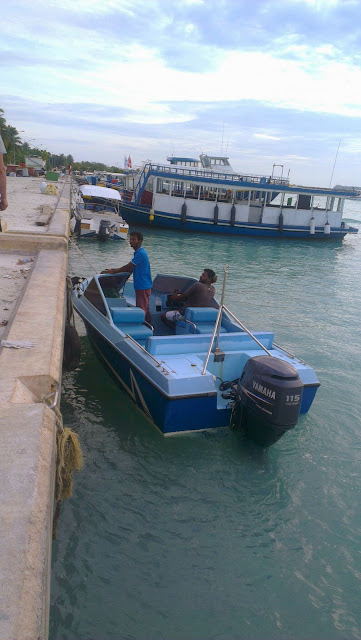 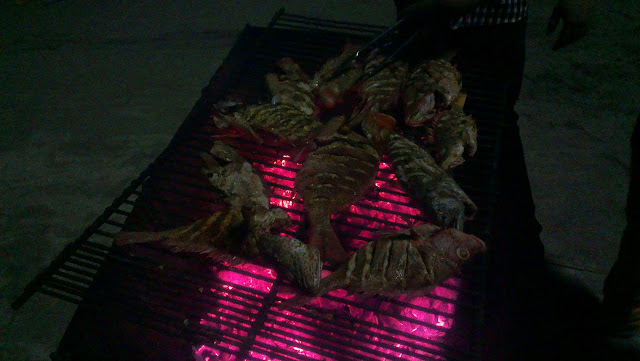 Two days at Maafushi so far.

Holiday Lodge, my guesthouse, served a nice breakfast. I managed to get a nice room, including breakfast, free city bikes for only 52us$. That's a fair price, and half of what I was paying the first night in Male.

After breakfast I visited one of the dive centers in town. I booked two dives for tomorrow morning.
They also told me some good snorkeling spots around Maafushi. Right of the beach. I visited two spots and saw heaps of colorful fish. Very nice snorkeling. For free.

The receptionist also took me to visit the school and and institution, orphanages for young people. Both places closed cause of schoolholiday, but very interesting. 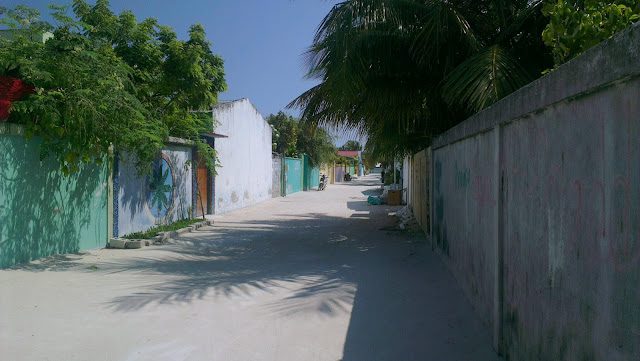